I’ve got a few food posts for you today, as I’ve fallen behind on our culinary adventures lately.  My wife tried out a new recipe for ‘Slow Cooker Potato Soup’ found on ‘Gimme Some Oven dot com,’ along with ‘Mama’s Yeast Rolls’ found at ‘South Your Mouth dot com’ – and they made the perfect combination!

For the potato soup, she added 8 large thickly sliced carrots, a bay leaf and some black peppercorns in a metal egg as well.  You could also add chopped celery.  She adjusted some of the ingredient portion amounts as well, and used an immersion blender separately on some of the potato chunks to thicken the soup.  She topped the potato soup servings individually with extra cheese, bacon bits, and chopped green onions.

The yeasted rolls turned out as advertised, and made 10 large rolls, but could have made a dozen medium sized rolls.  The large rolls would make wonderful sandwiches similar to a Kaiser roll.  As usual, I batted cleanup in the kitchen ~ all in a day’s work ~ enjoy! ☼ 🙂 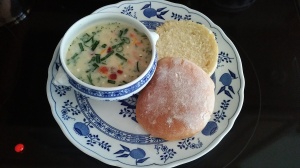