I’ve had a hankerin’ for ciabatta bread lately, so I found a recipe on ‘King Arthur Flour dot com’ for ‘Light Summer Ciabatta,’ and gave it a try today.  This was my first attempt at baking ciabatta bread, and while today’s attempt may not have been ‘picture perfect,’ it was absolutely delicious and soft inside, with a nice crispy crunch to the crust.

My ciabatta dough spread out wider than planned for on the baking sheet, and didn’t rise as high as I would have liked ~ but I was completely pleased with the taste, texture and crispy crust of my efforts today.

My guess is that I needed to add a bit more flour initially, as the mixed dough was smooth and soft, but too sticky to easily work with. The other issue this morning, was that the first rise didn’t rise much at all as the house was too cool for a good rise, so I placed the dough in a warm oven covered with a damp cheesecloth, which worked well for two additional rises.

Stay tuned for future updates on my attempt to bake the perfect ciabatta bread ~ enjoy! ☼ 🙂 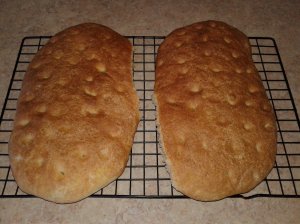