The other day we decided to make Slow Cooker Chicken Sandwiches, as our earlier Slow Cooker Turkey Sandwiches had turned out so well! 🙂 We placed a double layer of carrots in the bottom of a six quart slow cooker (to keep the chicken breasts out of the broth), and placed on top of the carrots four large chicken breasts that had been trimmed of fat, slathered in Extra Light Olive Oil, and seasoned with salt, pepper, Season All and Montreal Chicken seasonings ~ and cooked the chicken breasts on low heat for six hours.

I recommend checking your chicken after five hours, as cooking times and chicken weights vary.  Ours could have finished perhaps 20 minutes earlier, but still turned out perfectly.  Once you remove the chicken breasts, de-bone the meat as quickly as possible and place it into a large bowl, while ladling broth from the slow cooker over the pulled chicken meat to keep it from drying out.  The broth is remarkably clear as long as you removed excess fat and skin while preparing the chicken breasts, but leave the non-fatty skin on for additional moisture and flavoring while cooking.

Our chicken breasts yielded eight portions for the two of us, and has made some wonderful chicken sandwiches to date on homemade buttermilk bread ~ mine with a slice of Baby Swiss, just for the taste of it.  We enjoy Light Ranch Dressing instead of mayonnaise, Spicy Brown Mustard, Dill Stackers, a Dill Pickle Spear, and Pringles Original reduced fat chips with our sandwiches ~ enjoy!  ☼ 🙂 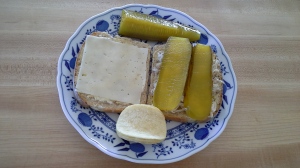 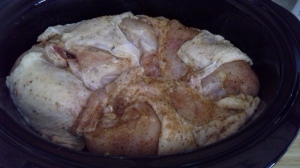