My wife made a delicious recipe today called ‘Slower Cooker Rice Pudding’ by Lisa Lavery, found online at ‘Chowhound’ dot com.  Rice Pudding has always been a favorite treat of ours, and this recipe made it so easy to make in the slow cooker!

We’re fans of slow cooker recipes, because once you prep the ingredients and get the slow cooker started, the slow cooker does all the work…except for the dishes, which is my specialty.  I grew up learning to cook and wash dishes at home, as my mom insisted that all four of us kids help out with dinner, either by cooking or doing the dishes, and I often did both.

My first official job at 16 was serving ice cream at a Baskin-Robbins ice cream parlor, and less than a year later as a dishwasher and Chef’s Assistant at Atlas Valley Country Club in Grand Blanc, MI, for a few months.

Sammy was our wonderful and very funny African-American Chef, and not only did I learn the ropes of dish washing ~ and washing out the giant pots used to prepare meals for hundreds of guests ~ but also the ins-and-outs of being a Chef’s Assistant, helping out wherever I was needed.  I also loved working around all the waitresses, but that’s another story! 🙂

My wife soaked the long-grain white rice overnight in cold water in the refrigerator, to make sure the rice would be softened during the cooking process.  She also added a little more cinnamon during the slow-cooking, as we love the flavor of cinnamon.  The raisins we used were California Golden Raisins, which add a very nice flavor to this wonderful treat ~ enjoy! ☼ 🙂 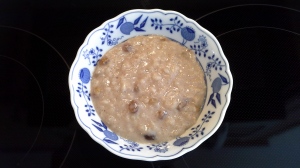